The Northern Hills Community Association (NHCA) celebrated their 25th anniversary in 2018 by painting the longest mural in Canada.

With the help of over 800 volunteers, the mural spans 850 metres, all of which was painted between August 4-6, 2018. Lead artist, Mark Vazquez-Mackay, spent eight days prior to the long weekend drawing out the design for the mural on the fence. 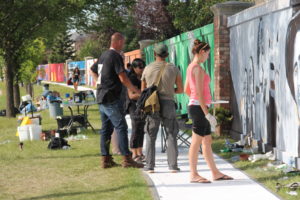 He remembers feeling “proud and surprised” to see the whole project come to life in just three days after hundreds of people came out to help paint. The whole fence was designed with a paint by number system which made it easy for anyone to take part. The fence was also divided into subsections for the 16 supporting artists to paint the areas with more detailed work.

Kim Walker, a local resident, came up with the idea to revive the fence.

“I saw a great potential for this fence,” explains Walker, “whenever the sun would set in the evening it was always completely lit up.”

After proposing the idea to the NHCA, they first needed to get all home owners on the other side of the fence on-board in order to start the work.

Walker and Laura Hack, a 2018 NHCA board member, went out in the middle of a snow storm to help neighbours shovel snow and ask for permission for the project. They gathered support and funding to bring the vision of the longest mural in Canada to life.

Two public sessions were held, as well as an online consultation, to find out what residents would like to see on their neighborhood fence.

Vazquez-Mackay recalls the residents had a “broad” interest which eventually led to the decision to paint the history of Calgary.

He divided the fence design into subsections to include some of the idea’s residents had. The starting point of the mural features the glaciers and goes through Calgary’s history, up until the 2013 flood.

“What I hope to come out of the project in general is that there’s a lot more community murals and communities get stronger and they come together,” says Vazquez-Mackay.

He hopes Calgarians can use it as an alternate way of learning about the history of their city and just enjoy the beautiful art produced through a combined community effort.

Check out these pictures from August 2018! Click each image to enlarge.